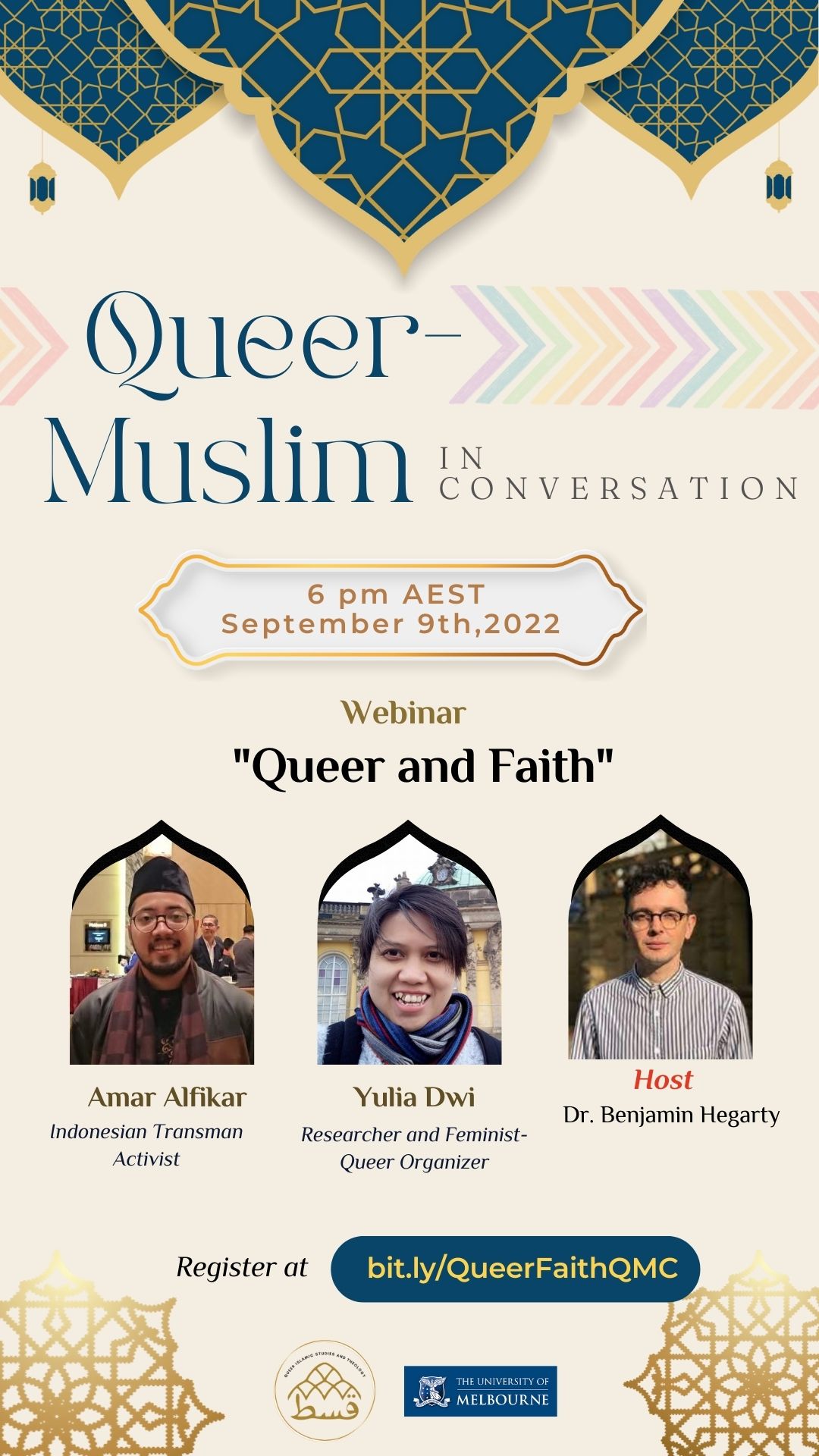 The webinar with the theme “Queer and Faith” will provide more comprehensive knowledge on ‘Islam and intersectionality in LGBTQIA+’ discussion. This activity will serve as a dialogue about LGBTQ+ and inclusivity issues both in Indonesia and Australian context. For the webinar, we plan to invite three speakers who are experts in their fields and are experienced with the issues of LGBTQIA+, Islam, and inclusivity.

What the LGBTQ+ and the Muslim communities have in common is that they are still considerably underrepresented in Australian academic, social, and political scenes. Furthermore, the two communities are also often times still viewed as exclusionary toward each other due to the stigmas carried on against one another. We understand that the Faculty of Arts has an LGBTQIA network, managed through a mailing list (faculty of arts queer network). Therefore, we intend to strengthen the existing networks within the Faculty and university and expand a deeper alignment with queer networks in Indonesia, Malaysia, and India through the collaboration made possible by this project. Furthermore, this project aims to build a bridge between the two communities and between the LGBTQ+ Muslim/Muslim LGBTQ+ community and the general population, particularly within the University of Melbourne. This activity (Art exhibition) aims to empower queer artists, call for solidarity and awareness from a wider audience at the University of Melbourne, and as an effort to eradicate marginalisation towards LGBTIQ+ communities.

Our project aims to empower the Indonesian Queer Islamic community and this is our first step to giving acknowledgment to Queer Muslims since Indonesia has the world’s largest Muslim population. Furthermore, The University of Melbourne has one of the largest concentrations of Indonesian scholars in Australia and is a leader in research on many aspects of Indonesia’s culture and society. There is a crucial need for deeper insights into the challenges and complexities of modern-day Indonesia, including the social inclusion of the queer community. In Indonesia, being a sexual or gender minority increases the risk of being abused and tortured (Zaman and Frances, 2009). A survey by Arus Pelangi in 2013 of 335 LGBT respondents in four metropolitan cities across Indonesia found that 89.3% of respondents reported that they had experienced violence in the last three years (Laazulva, 2013). In 2016, a transgender Islamic Boarding School was shut down after an attack by a reactionary group, Islamic Jihad Front (FJI), Yogyakarta (Muryanto, 2016).